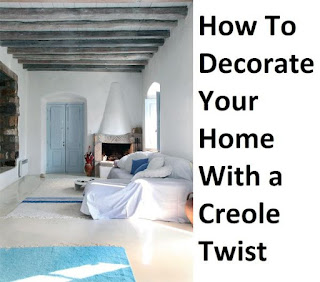 f all the styles of architecture and decorating around the world, very few have taken the best of all the others and made it a little bit better in quite the way that the style often referred to as “French Creole” has managed to do. The truth this that while this style of architecture that New Orleans is famous for is really heavily borrowed from many other cultures and yet uniquely New Orleans at the same time.

Creole architecture for many brings to mind intricate wrought ironwork, long shutters (to cover the windows during hurricanes originally), huge windows and doors (these were designed larger than typical homes in other parts of the country in order to create breezeways for the wind to come through in the sweltering hot summer months), and bright colors that you aren’t likely to find in most million-dollar neighborhoods. This style of architecture and home décor is also famous for huge balconies-also with wrought iron railing.

The amazing thing about the Creole style of home decorating is that there is no one identifiable feature that labels a design style as decidedly Creole. Lagniappe is a term that people hear quite often in and around New Orleans. For those who do not know, it means “a little something extra”. From an extra donut to a freebie bookmark and many things in between, that little something extra has a long history in New Orleans from the architecture to the music there always seems to be a little something extra that you couldn’t get anywhere else.

The interior design style of Creole is also very similar. Some consider it gaudy but the locals consider it that little something extra and it is. You may find a little Gothic style, a little bit of Jazz, and a whole lot of Mardi Gras in one room, and it’s quite all right because you are getting all that and just a little bit of lagniappe too. Home decorating in Creole country is an art form that defies logic and yet makes perfect sense for the rich culture and heritage that it encompasses.

For those that need a little inspiration who would love to incorporate a little Cajun or Creole spice into their living spaces, perhaps the following suggestions will prove to be helpful.

2) Music notes. Most people cannot think of Cajun country without thinking of the music that calls this great section of the country home. Music notes are a great way to symbolize the music that made New Orleans famous.

3) Mardi Gras Masks. Many people find that New Orleans symbolizes Mardi gras in their hearts and minds though New Orleans is not the birthplace of Mardi gras. The masks are a way that people from around the country can bring the ‘spirit of New Orleans’ home with them and decorate their homes with that attitude that can only be referred to as Creole in many hearts and minds.

4) Food. Believe it or not, the food is as much a part of the Creole home as any other design element. For this reason, a French Creole-style kitchen is often the way to go when it comes to home decorating in Creole fashion. The kitchen is the heart of a Cajun home and food is what makes it that heart. Use jars of beans, rice, pasta, and another lagniappe as part of the overall design and you might just be amazed at just how Creole the room begins to look. The most important thing to remember is that Creole is more of an attitude than a design style. Bring the attitude of “No Worries” into the design features of y our home and you will have the true Creole style to an art.